What is Allulose?: A Different Kind of Low-Calorie Sweetener

Allulose is the newest sweetener on the market and is quickly making waves for it’s similarities to sugar in both taste and texture. It’s also a very low-calorie sweetener with relatively no carbs.

Due to its unique characteristics, allulose is becoming more popular among ketogenic (“keto”) dieters—those who eat so few carbohydrates that the body begins making and using a separate energy source called ketone bodies. But allulose’s potential extends beyond just those on the keto diet. The sweetener is versatile for use in food products that are baked, frozen or in liquid items. These diverse applications makes it an alternative for those looking to reduce sugar content in their food and beverage choices.

It sounds too sweet to be true, so what is it exactly and is it safe?

Allulose, also known as D-psicose, is a rare, naturally occurring simple sugar. It’s found in small quantities in foods like figs, maple syrup, raisins, and wheat. As a monosaccharide, a singular sugar, Allulose shares similarities to glucose and fructose. In fact, it’s chemically identical to fructose, but they’re isomers of one another. Isomers are two or more compounds with identical formulas but different structural arrangements. This difference in structure makes it so that allulose and fructose are metabolized differently, and that’s what makes allulose so unique.

Your body doesn’t identify allulose as an energy source and can’t metabolize about 90% of all ingested allulose (1). That is to say, you can’t break it down and use it for energy. When consumed, most of it goes into your bloodstream, then your kidneys filter it out. What you do breakdown, accounts for about 0.2 - 0.4 calories per gram or 5 - 10% of the calories from a gram of sugar.

But here’s the best part. Allulose has been shown to not affect blood sugar or insulin levels. This is especially important for people with diabetes or someone monitoring their blood sugar (e.g., pre-diabetics or anyone adhering to a keto diet). It’s also more likely to be well-tolerated in the gut because of its resistance to fermentation (2).

There has been extensive research done on animals and the findings have been promising thus far. It has been shown and theorized that allulose is viable for the prevention and regression of diabetes (antidiabetic) through its anti-obesity, anti-hyperglycemia, and anti-hyperlipidemia effects. It’s also non-toxic in large doses over time (14).

Let’s start with allulose’s anti-hyperglycemic properties. When you eat food, it’s broken down and absorbed into the bloodstream. The rate at which it enters the bloodstream determines how much your sugar will spike, and in turn, the insulin response to regulate and uptake the sugar into fat cells. High blood sugar, hyperglycemia, occurs when you have elevated blood sugar levels in the bloodstream for prolonged periods of time. In a series of experiments and studies on rats and dogs, allulose was subsequently shown to have properties that lessen the postprandial (post-meal) response of glucose (3, 4, 5, 6, 8, 9). The consumption of allulose alongside a meal suppressed the glucose elevation in rats and dogs and lead to lower overall A1c readings versus the control group. This means it’s a potentially viable method by which to effectively control blood sugar spikes from sugary foods, especially in metabolically compromised subjects, and potentially lower A1c levels. The hypoglycemic effects of allulose are in themselves very noteworthy, but there’s more. 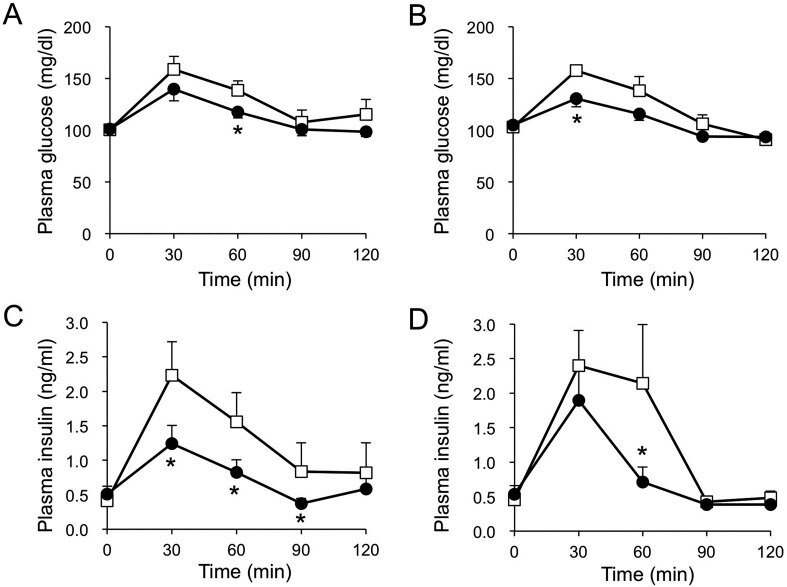 Groups A/C were given glucose and group B/D were given maltose. The circles in each graph represent the animals who were also given Allulose vs the squares which are the control group. Allulose clearly attenuates the plasma glucose and insulin response.

Allulose also has anti-obesity properties in rats. The addition of dietary allulose produces a marked decrease in weight gain and abdominal fat accumulation in comparison to glucose, fructose, and other sweeteners (3, 4, 6, 10, 11, 12, 13). Liver enzyme activities involved in lipogenesis (formation of fat) were significantly lowered by the D-psicose diet, whereas fatty acid oxidation (fat burning) was enhanced. Rats fed the D-psicose diet also had significantly higher energy expenditure and fat oxidation compared to rats fed the control diet, whereas carbohydrate oxidation was lower. This all suggests that the addition of allulose into the diet burned more fat, used more energy over 24 hours, and stored less fat than the untreated control group.  Thus, allulose’s potential for weight management may make it a useful tool for preventing and reducing obesity when used as a sugar substitute in foods.

Allulose was also shown to have some anti-lipidemia effects.  In a study of diabetic mice, allulose was compared to fructose and glucose and was tied to fewer weight gains, improved glucose tolerance, improved LDL/HDL ratio in lipid plasma, and improved lipid profiles in the liver (4, 5). In a separate study, dietary allulose supplementation in obese mice showed improvements in their hepatic steatosis (fatty liver disease) without calorie restriction or exercise (3).

Finally, and perhaps most importantly, through all the properties described above allulose appears to be a powerful tool for preventing and controlling diabetes in animals. Type two diabetes, in particular, is caused by insulin resistance leading to elevated blood sugar levels, hyperglycemia. Over time, the insulin-producing B cells of the pancreas may not be able to produce enough insulin or the cells burnout leading to cell death. If further combined with pro-inflammatory factors, one could develop an autoimmune disorder that attacks your B-cells (19). Allulose, in turn, has been shown to suppress the post-prandial effect of glucose helping with hyperglycemia and overall lower A1c levels (6). It also maintains glucose tolerance and insulin sensitivity (8), and it can help lower and control body weight, further helping with diabetes. Allulose helps regulate fat and glucose metabolism which helps maintain and preserve B cells (7).

While animal testing is extremely promising, there haven’t been many studies done on humans. More research will have to be done to determine whether the use of allulose in one’s diet is an appropriate treatment for obesity and diabetes.

The few studies that have been done on humans do yield promising results, but the sample sizes were relatively small and the subjects were usually all healthy individuals. Nevertheless, human trials showed that allulose attenuates postprandial glucose levels in healthy subjects (15, 16, 17) and in borderline diabetic subjects much like in rats. The anti-hyperlipidemic effect of allulose, combined with its anti-inflammatory actions on adipocytes (fat storing cells), is beneficial for the prevention of both obesity and atherosclerosis (15, 18). It’s accompanied by improvements in insulin resistance and impaired glucose tolerance (15). There were also no abnormal or clinical problems found from the continuous ingestion of allulose over 12 weeks (17).

The studies show promise for using allulose as a sugar substitute in food since it can prevent obesity in normal people and suppress fat gains in obese people. Allulose can be a unique functional sweetener because of its anti-obesity, anti-hyperglycemic, anti-lipidemia, and anti-diabetes properties.

Allulose is a rare sugar with the same chemical formula as fructose. Because it isn't metabolized by the body, it does not raise blood sugar or insulin levels and provides minimal calories.

It May Help Control Blood Sugar

It May Boost Fat Loss

Studies in obese rats suggest that allulose may increase fat burning and help prevent obesity. However, high-quality research in humans is needed.

It May Protect Against Fatty Liver

Research in mice and rats has found allulose may reduce the risk of fatty liver disease. However, the number of studies is limited, and high-quality research in humans is needed.

Allulose Looks To Be Safe, But Human Studies Have Been Limited

Animal studies using extremely high doses of allulose for up to 18 months found no signs of toxicity or side effects. Human studies are limited, but have not found any health risks related to this sweetener. Allulose is generally recognized as safe (GRAS) by the FDA.