Great Achievement Often Appears When Our Backs Are Up Against The Wall.

Easy times don’t make you better. No one conquered the world by binging on Netflix at home in their pajamas. Sure, sometimes we need to relax, decompress, and simply think, but staying in your safety zone for too long ultimately makes you slower, more complacent, or even depressed.

I should know, I’ve spent countless days and nights doing nothing in particular. Often, I “filled” those times with things I hoped would make me feel better (e.g., tasty junk food, alcohol), but ultimately only made me feel worse.

It’s easy to fall into this type of routine. Our lives are often scheduled around a 9-to-5 job we don’t really care about. We make enough money to be generally comfortable, to feel safe, and to be numbed from wanting more from life. We live for the weekend, a transient flash of excitement and fun, but one that always leaves us back at square one come Monday. We live as if each tomorrow were a guarantee, which is one of the biggest lies we tell ourselves.

Consider The Story Of Hernando Cortés

In 1519, Cortés landed on the shores of Vera Cruz, Mexico with just 600 Spanish soldiers, 15 horsemen, and 15 cannons. His ambition was far greater than his army. He wanted to conquer the entire Aztec Empire, a kingdom spanning 85,000 square miles with over 5 million inhabitants.

As they marched inland, Cortés ordered one of his men back to the beach with a single instruction: "burn our ships." This sent a clear message to his men: “There is no turning back.” They either win or they die. Although you might assume that Cortés’ men would have become despondent, with no exit strategy in place to save their lives, they instead rallied behind their leader as never before. Within two years, he succeeded in his conquest.

Hebrew tradition teaches a similar value. In ancient times, Israelite armies would besiege enemy cities from three sides only, leaving open the possibility of flight. They understood that so long as the enemy saw that they had an escape route available, they would not fight with their utmost earnestness and energy. In most cases, this played right into the besiegers’ hands. 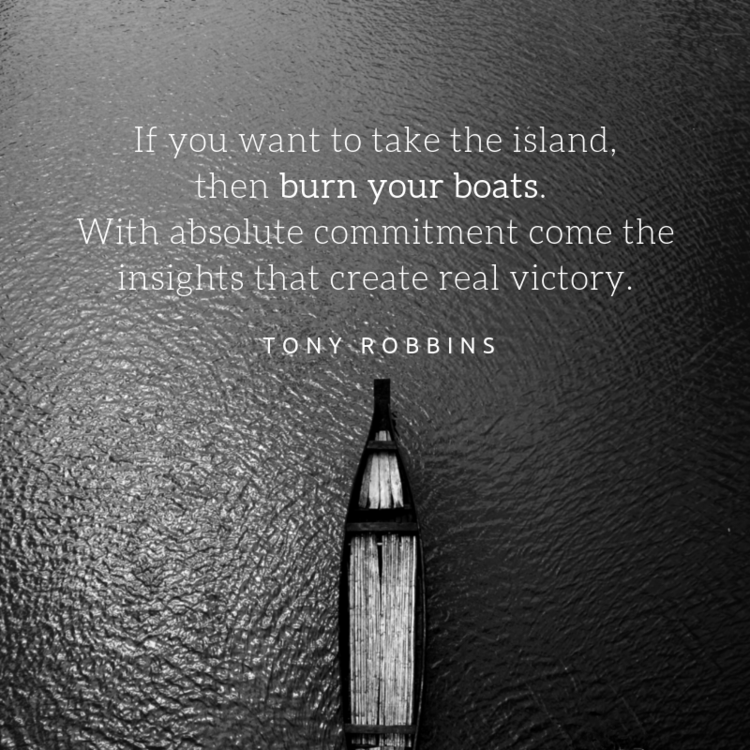 At its essence, burning boats represents a point of no return, a psychological commitment where you recognize that you have crossed a line never to cross back. There is no hedging, no looking over your shoulder. Everything must now be focused on succeeding in this new reality.

How fully would you show up each day – at work and in life – if retreat just wasn’t an option? How high would you reach, how greatly would you dare, how hard would you work, and how loud would you live if you knew ‘your boats were burning’ – that failure just wasn’t a possibility?

Too often, we hang on to our “life preservers” when thinking about attempting a new and scary thing. We may hang onto our job when wanting to build our own business, or use our day-to-day tasks as an excuse for not trying the things we’ve always wanted to do. The same thinking can apply in our personal relationships. We fear rejection or other undesired outcomes so we float around and don’t take the necessary risk needed to find and sustain deep, fulfilling relationships.

There are times in life when we need to make decisions even when the path ahead is unclear. Gather what facts you can, measure the risks, and use your best judgment to propel yourself forward. Once you’ve made a commitment to something, be willing to stick with it and not allow fear and second-guessing to derail you. Don’t paralyze yourself with the what-ifs. Concentrate on the task at hand and the steps needed to be successful.

Safety nets and escape routes can protect us from pain and injury. But they also tend to reduce the effort, focus, and commitment that we invest into a process. Is there something you’ve been putting on hold to do? Trust your inner voice. Pursue your dream. Burn your boats. Don’t look back. Julius Caesar proclaimed “the die is cast” in 49 B.C. when he led his army across the Rubicon river in Northern Italy to ultimately overthrow the Roman Senate and ultimately transform the empire into a monarchy. Caesar was past the point of no return and knew he could never look back. What’s your Rubicon? Are you ready to toss the dice?

A Note From The ChipMonks

You’re probably wondering, “what the heck does this post have to do with ChipMonk Baking and their low carb cookies?” Well the answer is that ChipMonk’s co-founders (Jose and myself), both left our full-time corporate jobs to run this business full-time. As of the writing of this post, we don’t pay ourselves a dime but instead are investing all of our time, money, and energy into growing the business.

Why do we do it? Because we’re motivated to help others improve their overall well-being via better nutrition. Because we love the act of creating and sharing ideas. Because of our Customers, friends, and family who cheer us on and share their support for what we’re trying to build.

We’ve left our ships scuttled by the shore to build something great, something that is pushing us to grow and helping others to do the same. We’re committed to making ChipMonk something we can be proud of, and we’re excited to have you join us along the way.

If you ever have feedback on how we can do better or simply need someone to talk to regarding your own “burn the ships” moments, never hesitate to reach out to us at info@chipmonkbaking.com.