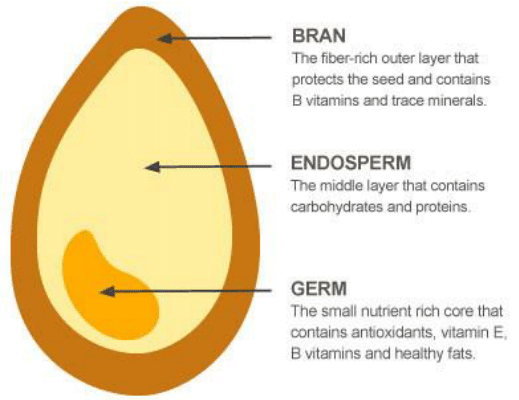 I think that most of you will agree with me on the fact that baked goods are delicious. Though you may have a favorite category of pastry or even certain flavors you prefer over others, they all have the same base ingredients: sugar and flour.

All-purpose flour has been the most commonly used wheat flour in baked goods for quite some time now. Flour is made by milling the endosperm, the wheat kernel’s inner layer which is full of protein and carbs. Without the bran (the shell) and germ (the sprouting section) of the wheat, the resulting flour ends up with 25% less protein and a significant reduction in at least seventeen key nutrients. Worse yet, without the bran layer, you lose a lot of the fiber the wheat kernel would normally provide. Fiber helps to slow down the rate of absorption of sugar into the bloodstream, so it's particularly important to people who have insulin issues.

The other ingredient, sugar, is even less nutritious and especially bad for anyone with a metabolic condition as it spikes blood sugar and insulin levels quite rapidly.

The basic takeaway is that while baked goods may taste great, they don't provide a lot of nutritional value and may exacerbate health issues like diabetes. These empty calories add inches to the waistline and can cost a fortune in medical expenses, but it doesn't have to be this way. There are plenty of all-purpose flour replacements available on the market today, and I took some time to break down some of the more prominent ones available for you.

Almond flour is a gluten-free flour made with almonds that have been blanched and then finely ground into a light, flour-like texture. This flour is naturally slightly sweet and typically replaces white flour in a 1 to 1 ratio, though it tends to make a denser batter which can be harder to work with. It’s great for denser pastries like muffins or brownies, but it functions as an excellent replacement in most pastries. Almond flour is more nutritious than white flour because it contains minerals like calcium, iron, manganese, magnesium, copper, and potassium. It is also an especially good source of protein, healthy fats (unsaturated), fiber, and vitamin E.

Nature's Eats is a great brand of almond four you can find on Amazon!

Coconut flour is another gluten-free flour made from ground coconut meat. It has a mild coconut taste and is rich in fiber, making it an excellent alternative flour for people with metabolic issues as it has a lower glycemic index. However, coconut flour is high in saturated fat compared to other alternative flours. Just keep this in mind if your recipe also calls for eggs and butter/coconut oil, other foods high in saturated fat.

Coconut flour is also super absorbent and dense, so you’ll need much less of it in a recipe, about a 1/4 cup for each cup of flour. Because it absorbs more water than white flour, it’s tough to get a light, fluffy texture when you bake with it. It best used in combination with other flours.

Anthony’s has an affordable coconut flour product that you can buy here. 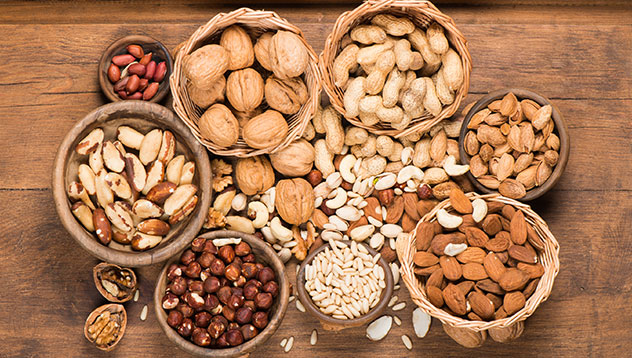 Other nut flours are similar to almond flour both in the way they bake and in their nutritional breakdowns. They're loaded with an array of healthy fats and are generally very low in carbs or sugar. They taste great and are a perfect alternative to flour in a 1 to 1 ratio. Ultimately, it comes down to taste and preferences. The macadamia nut is probably the best tasting, but it lacks protein. See the below chart for a comparison of the nutritional information of the different nut flours.

Psyllium husk powder comes from the seeds of the Plantago ovata plant and is almost 100% fiber. The high fiber content makes it an ideal thickening agent. It works best as a binder in most recipes with other flours as it has virtually no taste. Use one or two tablespoons to thicken recipes and give them a more bread-like texture.

Anthony’s has a Psyllium Husk Powder product on Amazon here.

Flaxseed Meal is high in fiber, protein, and fat. It contains very low amounts of digestible carbohydrates, thereby giving it a low glycemic index. These seeds pack a heck of a nutritional punch, including heart-healthy omega-3 fatty acids, b vitamins, and minerals.  It's best used as a thickening agent in recipes and replaces flours, butter, or eggs because of its fat content. Mix it into another nut flour for best results.

Other Grain Or Legume Based Flours

Here's a weird one for you if you're willing to try new things. Cricket flour is now being produced by milling whole crickets into a powder. The flour is a protein-rich alternative to wheat and is also low in carbs and fat. It's best used with a nut flour in a 2 part nut to 1 part cricket ratio, as it will add plenty of extra protein.

If you want to give it a try, you can pick up some cricket flour on Amazon here. I've experimented plenty with a lot of these flours. I generally found that they all have their strong points and merits. Ultimately, it comes down to what your preference is on taste and if you're working under any limitations on your diet. Being a type two diabetic, I tend to use nut flours alongside some psyllium husk or coconut flour. That allows me to recreate desserts and pastries that I can safely indulge in without having to worry about it affecting my blood sugar. ChipMonk is based on that very principle, so we use almond flour and fiber from psyllium husk in all our recipes.

At the end of the day, experiment with different flours and see what works best for you. If you decide you'd rather save time and buy something premade, we offer amazing cookies. If you're like me and enjoy the process of baking, then try our premade mixes!