FREE SHIPPING on all orders over $50! Click to Join our VIP Program for Even More Savings

What is Celiac Disease?

Many of ChipMonk’s Customers love our cookies because they are made with gluten-free ingredients. This begs the question though - why do so many people care about gluten? To help shed some light, we’re diving into celiac disease to help everyone understand why, for some, a gluten-free diet is a necessity.


What Is Celiac Disease?

Celiac disease (also known as coeliac disease, celiac sprue, non-tropical sprue, and gluten sensitive enteropathy) is a serious autoimmune disease that occurs in genetically predisposed people where the ingestion of gluten leads to damage in the small intestine. It is estimated to affect 1 in 100 people worldwide. It is currently estimated that 80% of the celiac disease population (that’s two and one-half million Americans) remain undiagnosed.

When people with celiac disease eat gluten (a protein found in wheat, rye and barley), their body mounts an immune response that attacks the small intestine. These attacks lead to damage on the villi, small fingerlike projections that line the small intestine, that promote nutrient absorption. When the villi get damaged, nutrients cannot be absorbed properly into the body. 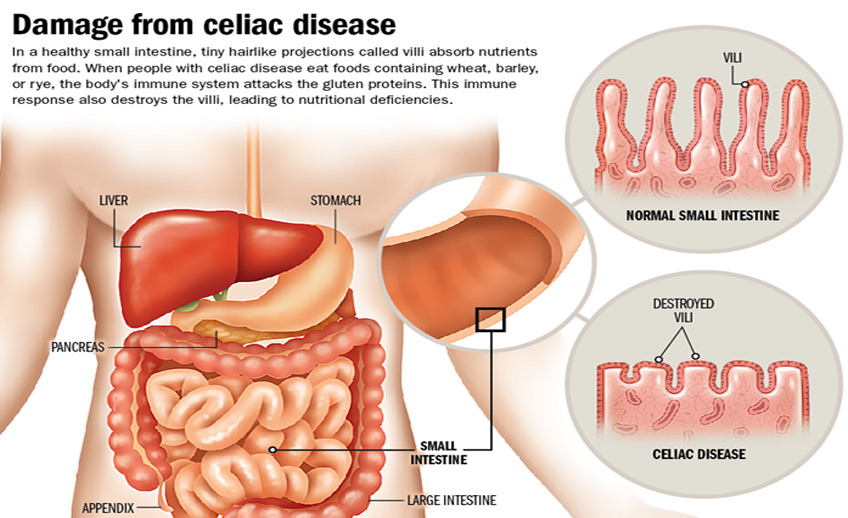 Celiac disease is hereditary, meaning that it runs in families. People with a first-degree relative with celiac disease (parent, child, sibling) have a 1 in 10 risk of developing celiac disease.

Untreated celiac disease can lead to the development of other autoimmune disorders like Type I diabetes and multiple sclerosis (MS), and many other conditions, including dermatitis herpetiformis (an itchy skin rash), anemia, osteoporosis, infertility and miscarriage, neurological conditions like epilepsy and migraines, short stature, heart disease and intestinal cancers.

It is not clear what causes celiac disease. A combination of environmental and genetic factors is important. Celiac disease occurs widely in Europe, North and South Americas, Australia, North Africa, the Middle East, and in South Asia.

Celiac disease occurs rarely in people from other parts of Asia or sub-Saharan Africa.

Celiac disease can be difficult to diagnose because it affects people differently. There are more than 200 known celiac disease symptoms which may occur in the digestive system or other parts of the body. Some people develop celiac disease as a child, others as an adult. The reason for this is still unknown.

Do You Have Celiac Disease?

Does Your Child Have Celiac Disease?

Digestive symptoms are more common in infants and children. Here are the most common symptoms found in children:

A simple blood test is available to screen for celiac disease. People with celiac disease who eat gluten have higher than normal levels of certain antibodies in their blood. These antibodies are produced by the immune system because it views gluten (the proteins found in wheat, rye and barley) as a threat. You must be on a gluten-containing diet for antibody (blood) testing to be accurate.

Currently, the only treatment for celiac disease is lifelong adherence to a strict gluten-free diet. People living gluten-free must avoid foods with wheat, rye and barley, such as bread and beer.

Fortunately, life on a gluten-free diet becomes increasingly easier each year due to the rising popularity of gluten-free foods among those with celiac disease, nonceliac gluten sensitivity, and wheat allergies. Excellent gluten-free substitute foods are now widely available in supermarkets, health food stores, and online. 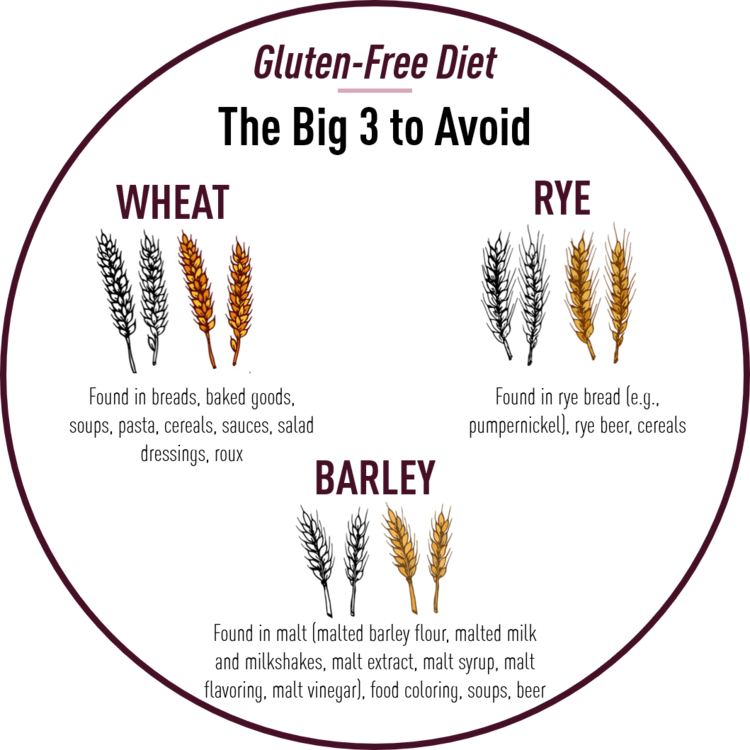 Check out the below infographic for a high-level overview of Celiac Disease. 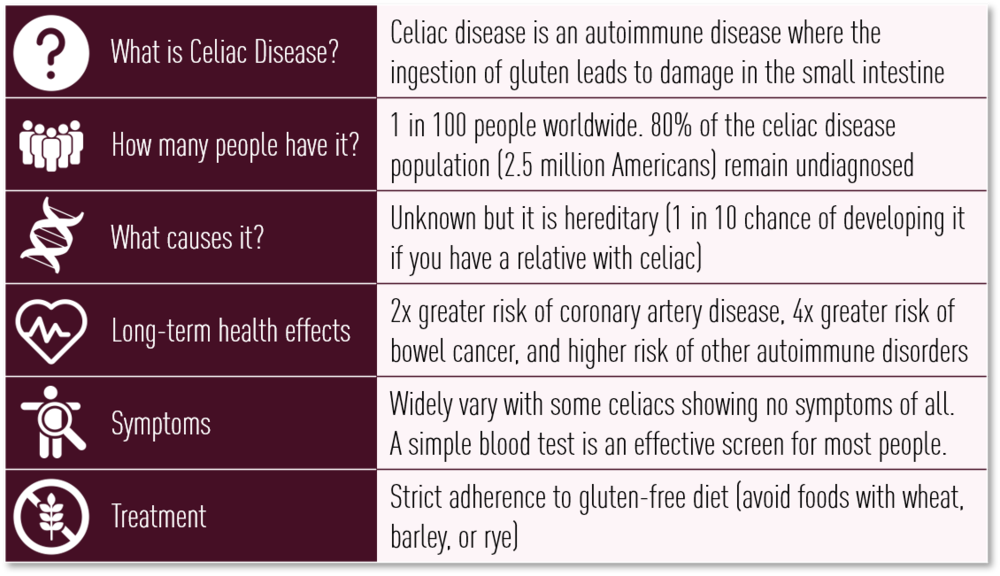